Flavours. So many of them!

In the past, cultural isolation kept humans across the globe from discovering each others’ regional taste kinks. But with the advent of jet planes and the Internet, the lid has been blown off this international conspiracy: potato chip flavours that are normal to us are not even available in some countries. And the selection and the marketing of chips across the world is weird. WEIRD I TELL YOU!

For example, this is a bag of Norwegian “regular” chips.

America has the pride and privilege of being the recognised inventor of the potato chip – even though we all know Canada is the place where they achieved perfection (All Dressed and Ketchup anyone?) Though there are lots of crazy chip producing countries – Japan, I’m looking at you – Great Britain deserves the crown for having invented the seasoning process in the first place.

In Canada and ‘Merica, the top potato chip flavour is Original/Salted. But this “original” business is a filthy lie. 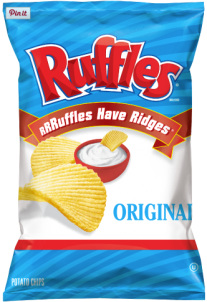 Classic or original salted chips. Can’t go wrong with the simple taste of fried potatoes, coated in sodium. If you wanna get really crazy you can get pinking shear salted.

Much like the “Best Pie in Thunder Bay” sign at my local diner,  the”original” claim is just so much horse puckey.

News flash, hot shot: the first potato chips marketed and sold commercially outside of American restaurants didn’t even have salt. Individually packaged chips didn’t hit the market until after World War II and the first potato chips – or crisps, if you will – were nada flavour. Nil. Naught. Nothing. It took some mad little Englishman to add a little twist-tie bundle of salt inside every individual packet to enhance the starchy, fried goodness of the crisp. Ever since that day, salty flavour is still the tippety-tops all across the land.

In fact Lay’s British brother Walkers still sells a “Salt and Shake” variety that lets you personalise your salt-to-potato ratio. Some would say that’s too much responsibility. But the Brits are up to the challenge!  Give them tiny packets of salt, or give them death.

But not really. They also have “ready-salted” for those who want to take the anxiety out of their snack food. Though I think they legally have to sell the “salt & shake” variety of chips in the six-pack in case you mess up the first 5 attempts at finding your perfect salt balance.

Apart from two different kinds of salted crips,  in the UK  they’re pretty big on synthetic and natural meat flavours. Cause meat and potatoes, duh. I read somewhere that all preparations of meat must have a corresponding chip or their meatiness shall be null and void under the Meat & Potato Act of 1789. 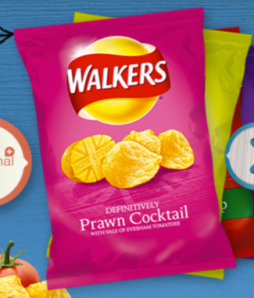 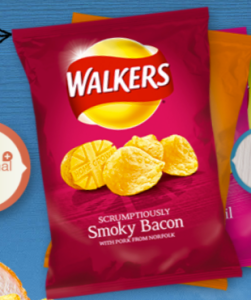 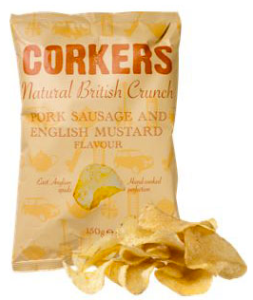 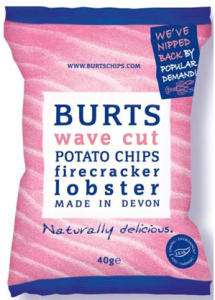 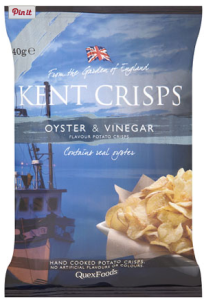 In the USA there can never be too many varieties of barbecue/ BBQ/Barbeque chips. I heard that if anyone suggests otherwise, they have to leave immediately and can’t come back until they have invented a new variety of BBQ chip.

Now enough with the kids stuff. Let’s get weird.

Wotsits say they taste like cheese, but I dare you to name the kind and what animal’s milk it has been produced from. They’re essentially Cheetos from space. And which sick bastard ate a Prawn Cocktail chip and said “I wish there was a way to make this taste and feel like eating pop rocks and shrimp.” 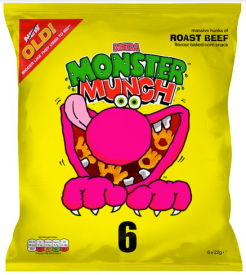 What about the Bear King inviting you to eat his subjects, the monster that wants you to indulge his cannibalism or the alleged “Space Raiders” that taste like beef? They have a lot of cows in space? Didn’t think so.

And so it seems that with advances in science and marketing, the flavours and even what constitutes a chip is continually evolving. Be sure when you’re taking your snack-based tour of the world to stay informed, aware, and dazzle people with your fried potato knowledge.

So last night was fun. Got to meet some neighbours, get a real feel of the psycho-social dynamic of my neighbourhood. All in all, a pretty solid night.

Thanks to my sweet staying awake skills (insomnia for you “glass half-empty” types) I was scouring the internet for cool coffee mugs when our security alarm (you know, the one I didn’t really know we had) went off at 3:30 a.m. Because I’d only been vaguely aware of its existence before that moment, I didn’t know how to make it stop.  As I tried vainly to guess which predictable code my precious treasure had chosen, he poddled down the stairs and flapped his hands at it blindly until the right sequence was achieved. Sadly, we could still hear something. And by hear something, I mean feel our temples oscillate and eardrums bleed.

Tightening the sash to my super-rad oversized baby-blue bathrobe with little blonde fairies all over it, I  poked my head outside to see the house across the street doing a soft light show while blaring an enraged Big Bird mating call to the marketing firm down the block – which was performing a coy dubstep emu warble in return. After grasping what noises were coming out of where, I wandered over to see if the neighbours were okay. As I leered into their living room window the problem became evident:  Ah. I am understanding… am super detective. Big Bird continues because no one is home.

Realising I could do nothing, I walked up the drive to return to my electric-bird-free home.  Suddenly three cop cars came shooting up the hill, making a beeline for the marketing firm down the block. Helpful people! Maybe help!  As they drove past, they see a woman, in the dark, in a house coat (bright baby blue with blonde fairy princesses all over it you’d forgotten) walking away from a house with a very insistent alarm wailing at tragic volumes. Even if they didn’t think I was in distress, they must have understood that maybe the house was in need of some form of intervention?  And before you ask, yes. I know they saw me. I made eye contact. Male passenger, female driver. They didn’t even give me a courtesy nod.

At this precise moment the neighbour next to sexytimes Big Bird comes out, sees me, sees the cop car fly by and starts shaking his head. “Did’i just bloody see them drive by a woman alone in her bloody nightgown comin’ ou’ a house with an alarm going off? Disgrace. What chance have we got, eih?” Well sir, I am glad you asked. We have whatever chance a nosy Canadian and middle-aged gentlemen have in the middle of the night on a block where the police won’t even stop if they’re being hailed.  We got to chatting and he then informed me that the owners of the loud house were on holiday. We tried to ascertain the name of the security company, whether it was worth calling their daughter and asking if there was a spare key, etc…when suddenly. Silence.

That silence lasted for an entire 3 seconds before the dubstep emu down the block at the marketing firm started to blare again and more emergency vehicles came up the hill, flying right past us. We stood around exchanging stories about local police ineptitude for another few minutes and eventually bid each other goodnight. After locking my door behind me, I checked on our rabbits who were alright,  if not curious and peckish. I dispensed treats. Everyone went to bed. My precious treasure, his tuckered little head on his pillow, grumbled about his early alarm and I told him, “Don’t worry! 4 more hours of sleep! That’s plenty, it’ll be fine.” He grumbled some more before dozing off. As I typed that last sentence, the house across the street started performing an encore. The electro birds have begun the beguine again.

If you love horror films, you’ll flip for British PIFs – Public Information Films. The UK equivalent of the Public Service Announcement has taken terrorising you into good behaviour to a whole new level. Forget the Saw franchise, those weird Korean horror films your friend made you watch, or anything else that’s come before: the truly terrifying filmmakers are all ad execs commissioned by different branches of the British government.

1. This Northern Irish road safety ad commissioned by the Department of Environment thinks that the best way to illustrate the statistic that approximately 28 children have been killed due to speeding cars since 2002 is to kill those children. On camera. Behold the PIF so intense they literally can’t play it on TV before 9 p.m. (traditional British watershed.) Another fun fact: it’s unlisted on YouTube so the prying eyes of children (like the ones they show getting slaughtered) can’t accidentally find it.

2. No one should have to hear Mungo Jerry right before they die. Sadly these young bucks took their words too literally and suffered the consequences: “Have a drink, have a drive/go and see what you can find.”

Death. Horribly, fiery, and bloody death is what they found. Are you happy now, Ray Dorset?

3. Our next selection from the 80s is a real treat. A booming and unsettling headmaster’s  voiceover straight out of  Pink Floyd’s The Wall plays over footage of a railway track: “It has been brought to my notice that some of you have been playing on the railway again…IT IS NOT THE GAMES FIELD.” “Ya, but if I were in charge of that shit, it would be the shit,” thinks an uneducated little boy aloud. Suddenly, the boy’s fantasies materialise before our eyes: concessions, marquees, spectators and judges! It’s like the Olympics of Peril!

We’re then privy to a proto-Hunger Games and swathes of children are brutally killed before a politely cheering crowd. This strange dystopian universe would surely have convinced Little Gabby to GTFO of the rail yard. (But I’m in my 30s now and I do what I want and I play in rail yards ALL the time.)

4. Dario Dargento and Nicholas Roeg are probably livid at the creators of this gem about drowning hazards from the Central Office for Information. How could the marketing world just go and upstage them without the help of a soundtrack by Goblin or hideous prosthetic noses? Donald Pleasance, whose name you may recognise from many great horror films of the 60s and 70s is both narrator and antagonist: The Spirit of the River! He openly mocks little boys showing off for the other lads and relishes in their deaths. Only the wary escape, and he hates those wangs. But beware… The Spirit of the River will be waiting for you, wary children. You’ll be feeding a duck one day and WHAMMO! Cause of death: being a little show-off, with your bread crumbs and avian friends.

Now that you’re watched these PIFs, you’re well-educated about the dangers of going on picnics, driving too fast, playing in the rail yard or mucking about by the river and should be fully prepared to lead a life of constant low-level fear and cautious optimism!

In closing, please enjoy this truly laughable Peter Sarofinowicz Show PIF parody about poison sockets. I mean, what kind of idiot would forget to turn off their poison sockets?